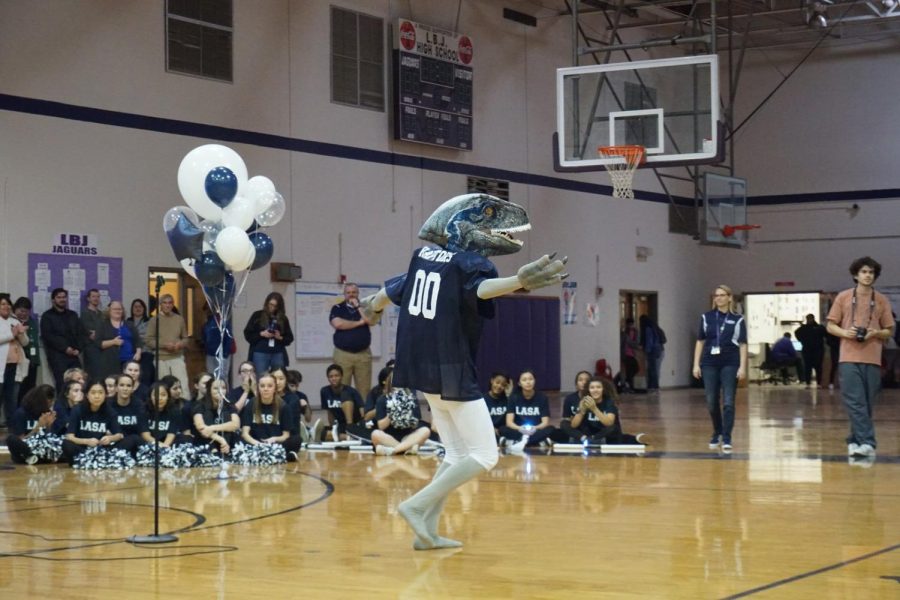 A crowd of students slowly enters a gym filled with navy table cloths, balloons and shirts that have all been brought in by cardboard boxes so as to not reveal their secrets. Throughout the gym, a cheer sounds as excited students wait to find out the future of their school.

On Feb. 27, the LASA administration held a pep rally to unveil the school’s new mascot and colors. LASA is scheduled to move to a new campus during the 2021-22 school year, meaning it will no longer share the jaguar mascot and purple colors with LBJ High School. The split from LBJ was a result of an Austin Independent School District (AISD) bond passed in 2017. This will allow LASA to move into a new building at the current Eastside Memorial High School campus. At the pep rally, it was revealed that LASA’s new colors will be navy and white, and the new mascot will be the raptor (dinosaur).

The new mascot and colors were chosen through a voting process designed by the student council with the help of administrators. According to sophomore Student Council President Sally Edwards, Student Council members sent out a Google Form so that students could submit ideas for the new mascot and colors. After ideas were submitted and narrowed down, Principal Stacia Crescenzi and AISD administrators eliminated some of the choices.

“I had already crossed off a couple that I didn’t think should get to the next level, and then the area superintendent and the superintendent were going to cross off any that they thought they should,” Crescenzi said. “There was a group of teachers who volunteered to do a deep dive into anything that might not be obvious, but could come out later.”

After they had compiled a final list of potential mascots and colors, LASA Webmaster Geeta Suggs created the ballot for the final vote. According to Edwards, all submissions were checked to ensure no double voting occurred.

“[The form] collected the student’s email, as well as making them log in through AISD, which really prevented double voting,” Edwards said. “And we, of course, throughout the process, checked through all of the emails to make sure that there was no extra voting or anything.”

The team also had to create a ballot that would be accessible to students, faculty and alumni. Edwards said it was important that all members of the community were represented on the ballot because each member has a large impact on the school environment.

“The LASA community is obviously made up of current students, faculty and alumni, and they all really contribute to what LASA is to all of us,” Edwards said. “We wanted to make sure that they were all included in this process.”

Each category had a weighted vote, with students having the most amount of weight, alumni having the least and faculty in the middle. After the new mascot and colors were decided upon, Suggs and other parents began to work on ideas for the pep rally. According to Suggs, a big challenge was the time constraints for setting up and taking down the pep rally.

“We were told we only get maybe 45 minutes to set up, we have a really large space, we have 1,300 kids, plus 100-ish faculty, and we had to be out of there in 15-20 minutes after the pep rally because of basketball,” Suggs said. “And nobody could know what the colors and the mascot are.”

In addition to having a new mascot and colors, LASA will also need to develop a new logo. According to Electronic Magazine and Advanced Graphic Design teacher Jill Giulietti, students were given the opportunity to create the new logo by Crescenzi.

“I think that material is easy to understand when we can find a way to connect it to the real world, and with a situation like this, it’s perfect because we’re actually bringing the real world into the classroom, not just making a simple connection,” Giulietti said.

Providing the students with experience isn’t the only reason for them to design the new logo, Crescenzi said. According to her, the students have the skill set and abilities to create a professional logo.

“I think we have ridiculously talented students,” Crescenzi said. “I have had a surprising number of graphic design companies and individuals contact me ever since they heard we were separating and would need a new logo, we’d need a new mascot and these things, offering their services that would cost me thousands of dollars, where I have a lot of confidence that our students can produce just as high-quality work.”

The reactions to the new mascot and colors were mixed. Some students, like freshman Maddie Meyers, felt that the selections provided on the ballot were not the best.

“I like their colors, but you know, it’s kind of McCallum,” Meyers said. “And, the raptors, I was kind of against it the whole time, but it’ll probably work out. I think the idea of a dinosaur mascot running around the field is kind of ridiculous.”

Other students, like senior Risako Nishiyama, said they felt that the new colors were fine, but the raptor was still a silly choice. According to Nishiyama, the novelty of the name might eventually wear off.

“Honestly, I’m not really happy about it,” Nishiyama said. “The colors are fine, but I just feel like raptors were used for a meme, and it’s kinda sad thinking that LASA is gonna have to live with that for a while.”

However, according to Crescenzi, the idea of the LASA raptors has been around for a long time. The idea extends even back to the days of the Science Academy, the first magnet high school created at the LBJ campus in 1985.

“I have a senior salute book from 2009 where they wanted to be the LASA raptors,” Crescenzi said. “It didn’t surprise me, for one, because I think that people have secretly always loved this name.”

LASA will separate from LBJ in athletics and academics UIL next year. However, according to Crescenzi, fine arts UIL will remain joined with LBJ until LASA moves to the new building. Edwards said while LASA will be moving to a new campus, they will always be thankful for what the LBJ community has done.

“I think the LASA community has been welcomed into the LBJ community, not only on campus, but also, we’ve been very accepted in the neighborhood, and I know that we’ve probably caused a lot of traffic and a lot of unwanted noise,” Edwards said. “They’ve just been really welcoming and accepting of us.”