ZACH is Back with Socially-Distanced Shows 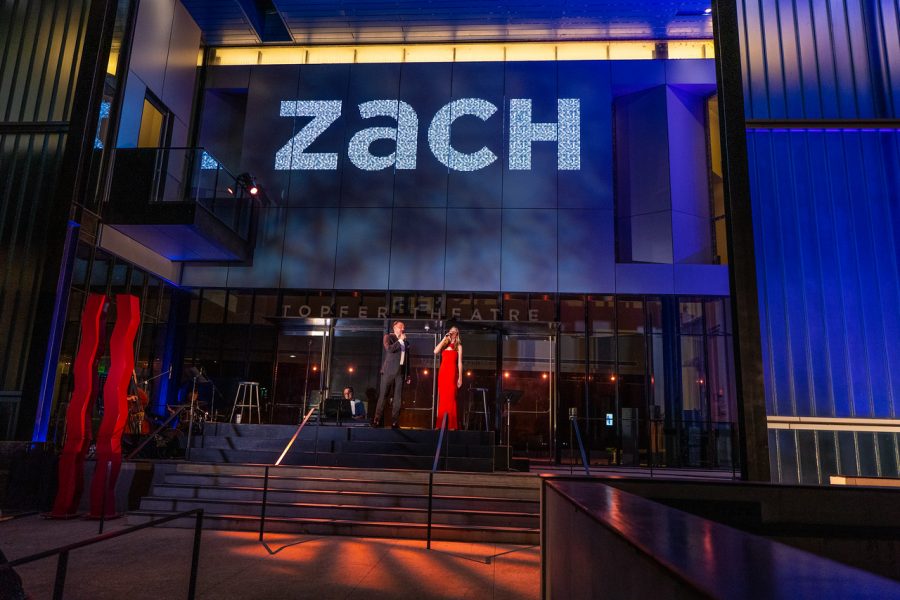 One of the many victims of the pandemic has been the theater. ZACH Theatre, located just south of Lady Bird Lake on South Lamar Boulevard, was forced to cancel its shows when COVID-19 caused it to temporarily shut down in March. Recently, the theater has started live productions again, but with a twist. These new shows, part of a series called “Songs under the Stars,” are outdoors, helping to create a safer environment for patrons.

According to Drew Nebrig, the director of marketing and communications at ZACH Theatre, as soon as COVID-19 case numbers in Austin started to rise, the theater shut down and moved online.

“It happened quickly for us, as it did for everybody,” Nebrig said. “It was one of those things where, on a Monday, we were talking about ‘is this going to affect us,’ and then by Friday we had shut down and canceled over 100 performances. We took a week or two to assess what the overall effect was, what we thought the next three four months were going to look like and what the best pivot for us was.”

One of those shows that had to close was “The Very Hungry Caterpillar.” Actor Chloe Van De Graaf, who was supposed to play the green leaf the caterpillar eats in the show, said she was shocked and disappointed by the news.

“I was devastated when I heard that they would have to close the show 3 months early,” Van De Graaf said.

However, parts of some shows were pre-filmed and customers who had already paid to watch shows were given the option to see a filmed version of the show. In addition, ZACH held virtual practices and classes over Zoom. Van De Graaf said that though this shift to online practicing and performing isn’t optimal, she is glad to still be participating in theater during the pandemic.

“I am extremely thankful that ZACH was able to continue classes and training online,” Van De Graaf said. “Of course it is different performing through a computer instead of real life, but I am so happy that I was still able to train even through quarantine.”

Nebrig said that throughout the summer, staff at the theater regularly sent out surveys to the community. These asked patrons about their comfort level and brainstorming ways to safely hold a show.

“We got a real sense of, beyond what we know we’re going to do regardless, which includes social distancing and masks, what are things that are really critical for our patrons to feel comfortable coming back,” Nebrig said. “We got a sense of both safety protocols and how much they meant to them.”

In October, when ZACH decided to hold their first live performance since March, much of their decision surrounded the safety of patrons and the desire to support local artists. Renelle Bedell, the Associate Managing Director for ZACH, said that much planning and surveying went into the theater’s decision to present this outdoor production.

“Creating theatre experiences is our mission,” Bedell said. “Therefore, we have been discussing safe ways to do so since we had to temporarily close our doors in March. After researching case studies across the country, talking with colleagues at other theatres, surveying our patrons and artists and getting plans approved by the city, we determined that a short one-hour outdoor concert was the perfect way to welcome the community back to ZACH, support our local artists, get used to operating under new protocols and generate some revenue to keep the theater afloat longer until we are able to resume operations full-time indoors.”

The “Songs Under the Stars” series is set to feature various musical performances. The first show featured a compilation of songs from different Broadway musicals performed by local Austin actors Jill Blackwood and Matthew Redden.

“Almost all of the artists in these concerts are local,” Nebrig said. “[Jill Blackwood and Matt Redden] are two of our patron subscribers’ favorite performers, and they live here and they’re people who have not been able to perform in seven months…we know these people are favorites of our audience, and we want to employ as many Austin artists as we can.”
According to Nebrig, the audience reaction at ZACH has been overwhelmingly positive. She said that ZACH’s success has the potential to serve as an example for Austin’s greater art community.

“Everyone has been so hungry for live performances and for art during this,” Nebrig said. “We found some things that work really well, and we are always excited to share that information and hope that other art organizations are able to do the same thing.”