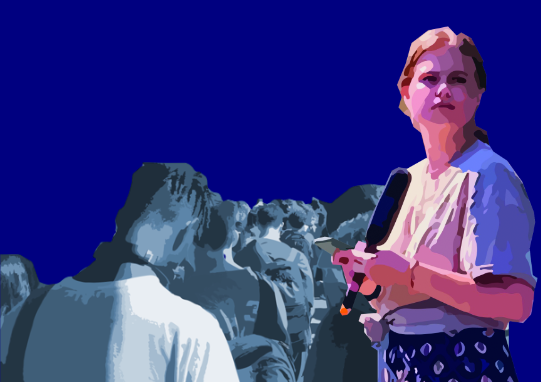 There hasn’t been a week in 2022 without a mass shooting. The Buffalo supermarket shooting in New York left 10 dead and three injured. The Highland Park shooting during a Fourth of July parade in Illinois left seven dead and over 30 wounded. The Robb Elementary shooting in Uvalde, Texas, claimed the lives of 19 students and two teachers.

These shootings add on to the names people already know by heart: Columbine, Sandy Hook, and Marjorie Stoneman. In fact, there have already been 27 school shootings and 314 mass shootings in 2022 alone. Not only do large numbers of shootings take a toll on the mental health of survivors and others closely connected to gun violence, but the tragedies affect those who simply keep up with current events. A study from UC Irvine showed that consuming media shortly after a tragedy can lead to increased levels of stress and fear. According to March for Our Lives Austin organizer and Anderson High School junior Levi Langley, the sheer commonplace of gun violence causes it to be on many students’ minds.

“Everytime I walk through the doors to go to school, it crosses my mind,” Langley said. “Every time the principal comes over the speaker at an unusual time, it’s on my mind. Even on one of our last days of school, the power kept going off, and anytime anything unusual happens, it’s on our minds.”

According to the Washington Post, while some students have faced actual school shootings, it is far more common for students across the country to undergo lockdowns or gun violence scares. According to senior Catherine Masey, LASA had its own scare at the campus the school shared with LBJ back in the 2019-2020 school year.

“When I was a freshman on campus at LBJ, there was a guy with a gun in the neighborhood, and everybody had to go into lockdown and freaked out,” Masey said. “Some kids were crying, and some kids were acting like it was nothing… a school shooting might not happen to [us], but our friends could absolutely be killed by gunfire.”

According to LASA Audio Video Production teacher Vanessa Mokry, it’s important to create spaces in classrooms for students to talk about the violence in schools. She believes it is especially important to incorporate these discussions in curriculums for Gen Z students.

“After the tragedy in Parkland in 2018, it did feel like students were more on edge,” Mokry said. “In that year, one of the films nominated for the short film Oscar was about a school shooting as well…I focused on preparing the kids a little as well when we watched that film. It served as a good primer to get a group conversation started about how people were feeling, about safety in the school, and just feeling in general.”

Similar to Masey, Langley has experienced a gun violence scare and went into lockdown at Murchison Middle School in 2018, where a parent had been walking around the school with a firearm on his belt. Langley and March for Our Lives are calling for common sense gun laws to eliminate these threats.

“One of our action goals, specifically in Texas, is passing red flag gun laws,” Langley said, “which are basically common sense gun laws like raising the age to have a firearm and having universal background checks. We’re also calling on [Gov.] Greg Abbott to hold a special session on gun violence, and listen more to young people and community members.”

In recent years, Abbott has passed several bills making purchasing and owning a gun easier, including authorizing Constitutional Carry, a law that makes it legal for Texans to carry a handgun without a license to carry. Masey said she expects nothing less from Texas politicians but believes that banning assault weapons and increasing mental health support is what Texans deserve.

“What I expect versus what I want are two very different things,” Masey said. “I don’t expect anything from our Texas officials. What I think we deserve is putting in place restrictions that are going to protect their citizens, strengthening background checks, strengthening mental health supports, and early childhood intervention…What I don’t want is their thoughts and prayers.”

While passing gun control legislation and funding for mental health lies in the hands of elected officials, there are still actions students can take. According to Langley, supporting local organizations is important to implementing change. For example, March for Our Lives Austin, which is led by Langley, will be posting updates on how to join the chapter on Instagram.

“It sucks to ask students to do the jobs of adults, but Texas has so many gun violence prevention organizations you can join like Texas Gun Sense and the Community Justice Action Fund,” Langley said. “Even if you text the March for Our Lives number 954-954, they actually text you daily actions you can do to stay involved…. The organizers around you are doing the work every day, even when gun violence isn’t in the headlines.”

According to Masey, remembering and honoring the victims of shootings is equally important as advocating for gun restrictions. For example, Masey organized a vigil in the LASA courtyard on May 26, 2023 to honor the victims of the Uvalde shooting.

“I remember just wanting to do something, wanting to not feel like I was doing nothing again,” Masey said. “I wanted to do something that would let other people who were feeling grief in the same way as me come together and think about those kids because I know that if that was my kid, I would want people to not only do things but to honor their memory.”

Mokry worked with Masey to organize the vigil, helping get approval from the school for the moment of silence. According to Mokry, LASA students are very passionate about policies that affect them but could also do more to initiate activism at school.

“School shootings now feel like one kind of tragedy in a long list of events in which we are constantly bombarded,” Mokry said. “Uvalde happened at the end of school, so there was not really a lot of time to get a sense of how it affected students…I think student voices can make a real difference, and [LASA students] want to help when an opportunity presents itself, but they don’t really know what to do otherwise.”

Days after March for Our Lives marched in Austin on June 11, the United States Senate passed the first bipartisan gun violence prevention bill in over 30 years, which expands background checks and contributes to federal mental health funding. While Langley believes that isn’t nearly enough to mitigate gun violence, she also said it’s important to focus on the small successes that come from the movement.

“It’s very discouraging when you get involved with this kind of work because there’s one mass shooting after the other, and it can be really intimidating because of how devastating and draining it can be,” Langley said. “But I think it’s important to know that progress is always being made.”