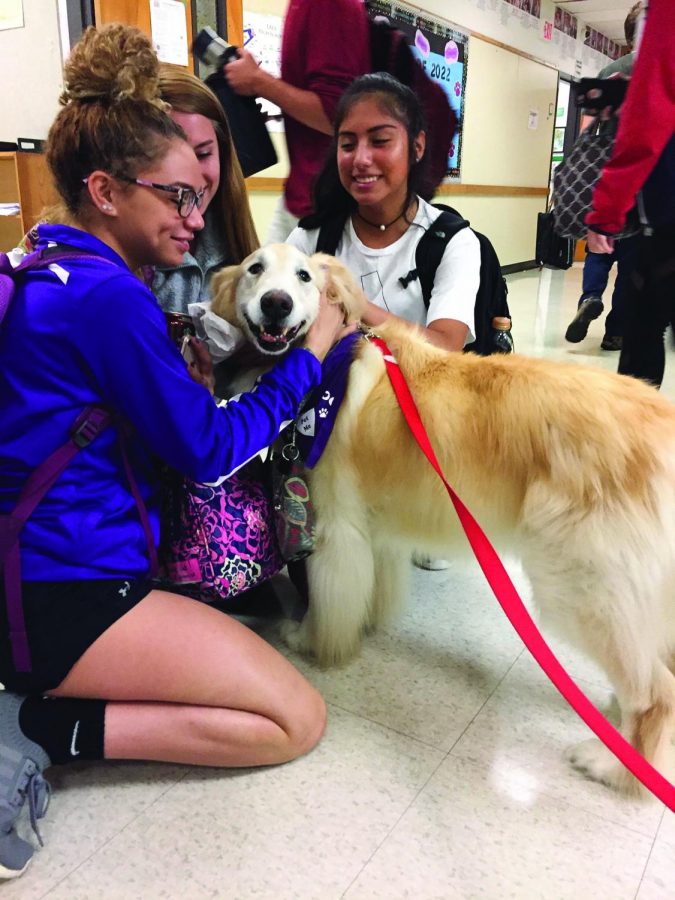 Students hand out with Scout and appreciate her companionship. photo courtesy of Sophia Blaha, Aaron Booe and Helena Lara

Dogs are often characterized as man’s best friend, but what if they could extend from that and become student’s best friend? This year, a new individual joined the LASA staff. Scout, a golden retriever, is on a mission to put a smile on every face at LASA.

In 2015, the wellness counselors made the decision to incorporate Human Animal Interaction (HAI) at LASA. It began with Bruce Wayne, who was the school therapy dog for three years, prior to his retirement.

Scout’s mom, Carole McPherson, is an academic counselor at LASA.

“It’s a big loss for us not to have a therapy dog,” McPherson said. “And I knew Scout would be perfect at being a therapy dog, so I looked into getting her certified, and here we are.”

Ms. McPherson got Scout when she was eight months old from the brother of a friend of McPherson, and has been a beloved member of the McPherson family ever since. After Scout turned eleven, a friend of the family suggested Scout become a certified therapy dog, just as Bruce Wayne had been.

“He said I could have her as long as I didn’t change her name,” McPherson said. “[But] her name should be Dixie or something feminine because she’s definitely not a rough and tumble kind of gal.”

Principal Stacia Crescenzi believes that the response to Scout has been extremely positive.

“In the hallways, students’ faces seem to light up when she walks by,” Crescenzi said. “Research suggests that interacting with dogs, even for a very small amount of time, decreases stress by releasing [positive chemicals].”

Research done by the American Psychological Association proves interaction with animals triggers positive endocrine responses, such as changes in the levels of chemicals like cortisol, epinephrine, and norepinephrine, and there has been a global movement to incorporate HAI in education and psychology.

“I feel like the changes started when we introduced therapy pets to the campus in fall of 2015,” Crescenzi said. “We have seen individual students really connect and feel safer and more comfortable when interacting with therapy pets.”

McPherson believes it is important that Scout’s daily routine is firm. She wakes up in the morning, eats breakfast, and heads to school with McPherson. Then she proceeds to head upstairs and get ready for her day. McPherson gets her water, and they head out to greet the students.

“There is a visible change in demeanor when students see Scout,” McPherson said, “I’ve even heard students say, ‘Let’s lower our stress, let’s pet the dog.’”

After they walk around in the hall, they usually head back to her office. McPherson said they sometimes have appointments in classrooms before stressful assignments, such as essays and tests. Mcpherson said that Scout wags her tail and does the best she can to reassure them.

Being a therapy dog is a tiring task, though. Much of Scout’s day is taken up by napping. Despite her perceived laziness, McPherson said Scout can sense a student in deep stress.

Scout’s presence at LASA has managed to leave a big impact on the school, McPherson said. Students who have seen Scout leave the office smiling. LASA has had spared no time integrating her into the community.