Golf tees off for the season 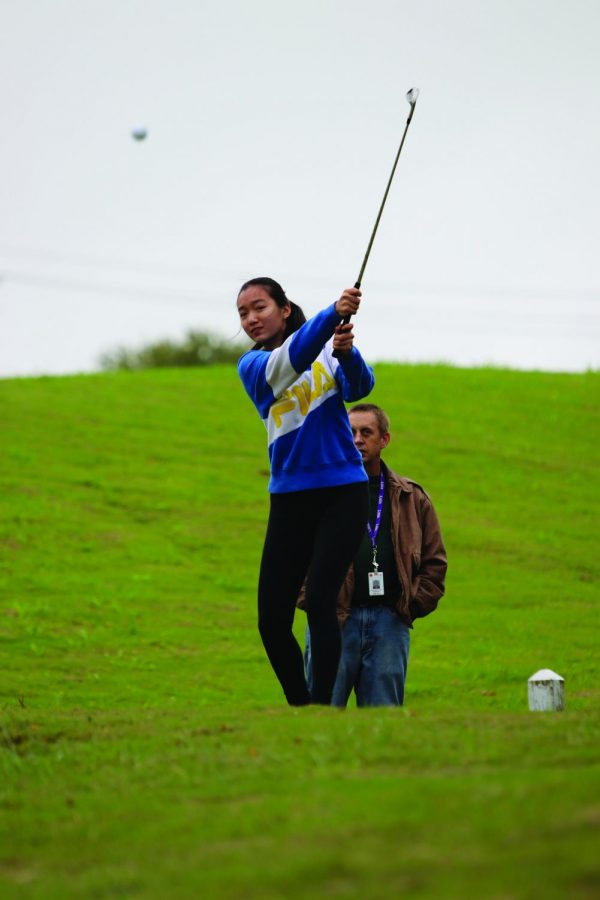 The first thing Mary Sophia Shakespeare does when facing a golf course is place herself behind the ball and line her driver up with the flag. She takes two practice swings and breathes in deeply, aiming herself at the flag. The last thing she does is ground her club and tell herself, “I got this.”

The LBJ golf team consists of about twenty members in the girls and boys varsity teams. Coach Jon Croston has been involved in the golf team at LBJ for about four years and has experience coaching at two other high schools. Shakespeare, a freshman at LASA, joined the LBJ golf team this school year. She has been playing the sport for nine years and was looking forward to being part of a high school team because she said it has a lot to offer.

“Not only is it really fun to play, but it gives you a lot of really good opportunities,” Shakespeare said. “It’s really good for getting to know people, and you get to go to all these events where you meet people in the business industry. Also, it’s really good for college scholarships.”

LASA freshman Anya Kureshi, who also joined the team this year, said a lot of people underestimate golf as a sport.

“I’m pretty sure people don’t take golf seriously because it’s a bunch of really old guys who play it,” Kureshi said. “There aren’t a lot of young people who play golf.”

Shakespeare thinks that golf does not get nearly as much attention as it should.

“It’s not like a major-league sport, so people don’t really see it as a sport,” Shakespeare said. “They see it more as a game.”

Although the LBJ golf team offers an opportunity for teenagers to actually get involved in the sport, both Shakespeare and Kureshi said it is not as popular as it should be. Croston reported that there are 15 to 16 active competitors on the golf team at the moment, as opposed to the football team, which has about 50 athletes on the varsity team alone. Kureshi hopes more people will take up the sport.

“I think people should participate in golf because it’s a great way to focus and learn how to be patient,” Kureshi said.

Croston, who has been golfing for years, finds golf unique compared to other sports because it is a sport people can play during their whole life.

“I don’t know many sports that you can play very long in your life. A lot of people play a sport in high school and maybe even play in college, and then they’re pretty much done,” Croston said. “But golf is seriously something that you can play even when you retire and you’re seventy years old. You can always go out and play a game of golf.”

Croston encourages people to take the time to try golf usually find themselves enjoying it.
“If you’ve never played and you’ve never tried it, you don’t think it’s a sport,” Croston said. “But anyone can do it. It’s not just for the elite.”